How to Manage Plagues + Politics

There is a long list of books that almost didn’t get made.

— Harry Potter, Gone with the Wind, and Stephen King’s Carrie were all famously rejected more than a dozen times.

— T.S. Elliot rejected George Orwell’s Animal Farm with the commentary, “We have no conviction that this is the right point of view from which to criticize the political situation at the current time.”

— L. Frank Baum, author of The Wizard of Oz, kept a journal of his rejection letters before his beloved classic was published.

— The Sun Also Rises, often considered one of Ernest Hemingway’s best, was rejected with the commentary, “Certainly, what is not needed are treatises about bullfighting and underemployed men who drink too much.”

— A rejection letter sent to F. Scott Fitzgerald for his classic Gatsby book suggested, “You’d have a decent book if you’d get rid of that Gatsby character.”

— Little Women‘s Louisa May Alcott was told to stick to teaching.

— J. K. Rowling was advised to get a day job because she had little chance of making money in children’s books.

— In one of the more famous rejections, Editor Peter J. Bentley queried Herman Melville, “We were wondering if changing certain of the story’s elements might not buoy its purchases at the shop, as it were? First, we must ask, does it have to be a whale?”

I think many of us like looking at these lists because they give us hope that our own projects will (somehow) come to life and be acknowledged.

Yet, when we look at the lists, they don’t really tell us the full story. Can we appreciate the twists and turns it took for these authors to get published or keep working?

Do lists like this inspire us to actually do the work — or do they create a false sense of possibility?  Then we sit back and hope for some unseen magician to bring luck our way? Do we twiddle our thumbs and wait for some great Oz to show us the path?

Our storytelling capacity is prodigious, especially when it comes to our own lives. Real-life is often more complicated — and sometimes more straightforward than we care to admit. We just need to listen.

Take the story of Sarah Bakewell. Bakewell is a British writer who worked as a curator of early printed books and a part-time cataloger of rare books for the National Trust. 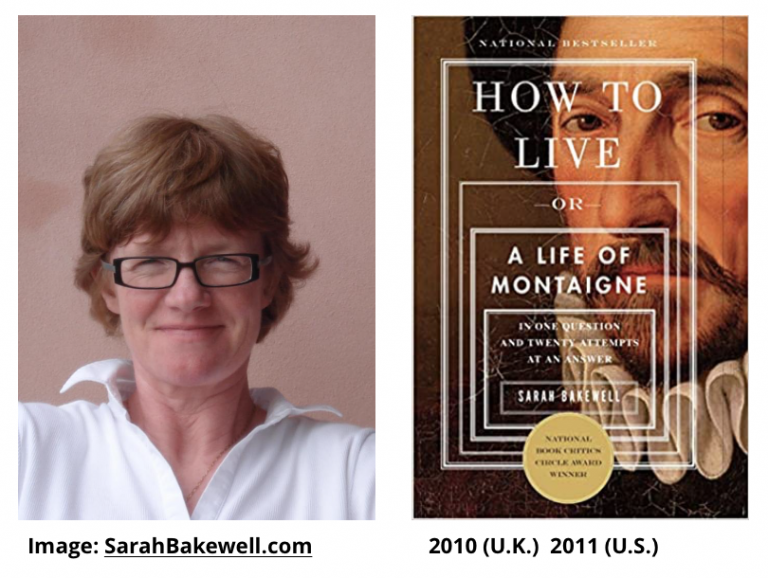 A few years ago, she was living in Budapest, trying to write a novel which wasn’t coming together. “It was quite awful,” she admits with hindsight. So, she decided to return to London.

When she arrived at the train station in Budapest for the long journey, she realized she had no reading material. As she waited for departure, she perused the second-hand bookshop across from the station.

Since she did not read Hungarian or German, most of the shop’s books in those languages, her options were severely limited.

She ended up with a book titled Essais by a 16th-century French nobleman she was only vaguely aware of, Michel de Montaigne (1533 – 1592).

Montaigne was a lawyer, landowner, winemaker, magistrate, and mayor of Bordeaux. Most of his adult life was spent during the decades-long brutal and bloody religious and political wars that raged on French soil from 1562-1598.

The Wars of Religion, as it became known in history (note the plural in wars), saw the Catholics with support from most of the French Kings in bitter conflict with the Huguenots, a weak confederation of French aristocrats who supported the Protestant Reformation.

The on-again/off-again internal conflict that raged for decades often spilled over into international mayhem with Spanish, German & Swiss combatants joining the French melee.

On top of the religious and political conflict, there was the inconvenience of a small pestilence called the plague. It showed up in Montaigne’s hometown during his second term as mayor and turned the place into a morgue. It’s estimated that almost half the population perished.

As a lawyer and public official, Montaigne was often forced to arbitrate minor local conflicts. Though a moderate Catholic, the various roles he played in public life often required that he articulate both sides of a disagreement. A skill he later put to fair use in his writing.

In 1571, with the political and religious conflicts still ravaging the country and plague always a possibility, Montaigne resigned his public duties. He retired to the family chateau — to ‘work from home”.

In his tower office reportedly housing over 1,000 volumes, he tended to his grapes and his writing. Occasionally, he was called back to public service and needed to travel, often fraught with real danger. But for the most part, he organized his life from home.

But even then, working from home (albeit, a chateau) was a challenge. Montaigne frequently felt interrupted in his writing by local squabbles and the distractions of duty required to keep the family’s winery business running.  (Though no longer in the de Montaigne family, the chateau winery is still producing bottles.) 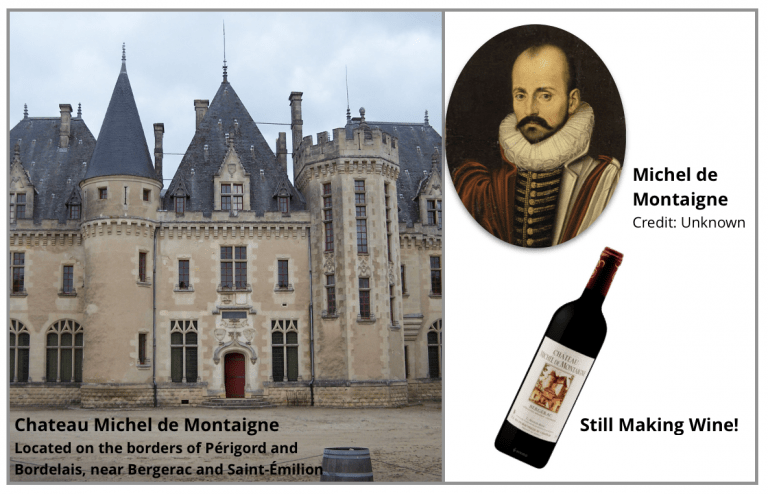 His initial writing was in Plutarch and Seneca’s style, but as he listened more to his internal voice and developed his hand, he created a unique writing format.

Montaigne is credited with creating the genre we now call the essay.

The word ‘essay’ derives from the Latin word ‘exagium,’ meaning a weighing, an examining, or presenting a case. Essays offer a particular point of view, analysis, interpretation, or set of facts supporting an idea.

Montaigne’s essays, written over twenty years, often sound like a series of contradictions. However, Montaigne didn’t see it as such; rather, he saw his writing as a record of his changing ideas as his experience and knowledge grew.

He was not embarrassed to change his mind — doing it often in all manner of subjects. He believed the ability to change one’s mind was part of living an examined life. He writes,

“I cannot keep my subject still. It goes along befuddled and staggering, with a natural drunkenness. I take it in this condition, just as it is at the moment I give my attention to it… I may presently change, not only by chance but also by intention. This is a record of various and changeable occurrences, and of irresolute and, when it so befalls, contradictory ideas: whether I am different myself, or whether I take hold of my subjects in different circumstances and aspects.”

Today, we are less appreciative of this trait — in ourselves and others — the ability to generously reconsider and change one’s mind in the face of new information and knowledge.

Montaigne’s volumes of essays are a delightful, meandering record of his thinking — often, they are a discourse of all sides of an issue.

Centuries after Montaigne published his essays, Sarah Bakewell traveling from Budapest to London on that long and monotonous train ride, having given up looking out the window, began reading this 16th-century Frenchman.

She was immediately captivated.

“I was completely astonished to find not at all what I had expected.  He was 16th Century, but that was about where it ended because he was chatting away,.. friendly, approachable, entertaining…

And thus began her five-year journey reading, researching, and writing her own award-winning book, How to Live: Or A Life of Montaigne in One Question and Twenty Attempts at an Answer.

Bakewell’s missive is less a biography or an overt self-help primer on how to live (the title is somewhat misleading if excellent marketing copy to catch your attention). It’s more a history of how Montaigne’s common sense and very human advice have been interpreted by others.

As I’ve dipped in and out of Montaigne and Bakewell the last few months, I’ve often wondered:

~  What if Michel de Montaigne hadn’t been listening to himself and writing down his observations?

~  What if Sarah Bakewell had insisted on finishing that novel rather than follow her curiosity about a dead Frenchman?

We wouldn’t have her engaging, How to Live.

~  What if you sat down and planned a few small steps to execute in the coming quarter that took you closer to your passion goal?

Sometimes, gatekeepers hold us back.

Sometimes, life events, like pandemics and political upheaval, interfere with our progress.

Sometimes, we hold ourselves back because we are not listening to that internal voice providing us direction.

We’re living in unprecedented times — for us. But not so unique if one considers world history. There are plenty of examples that can provide solace and advice for finding and doing your (deep) work — even under challenging circumstances.

What’s the project you want to begin, continue, or finish in the coming quarter? How can you get yourself organized and block off time for some deep work? What small steps will get you closer to your finish line? 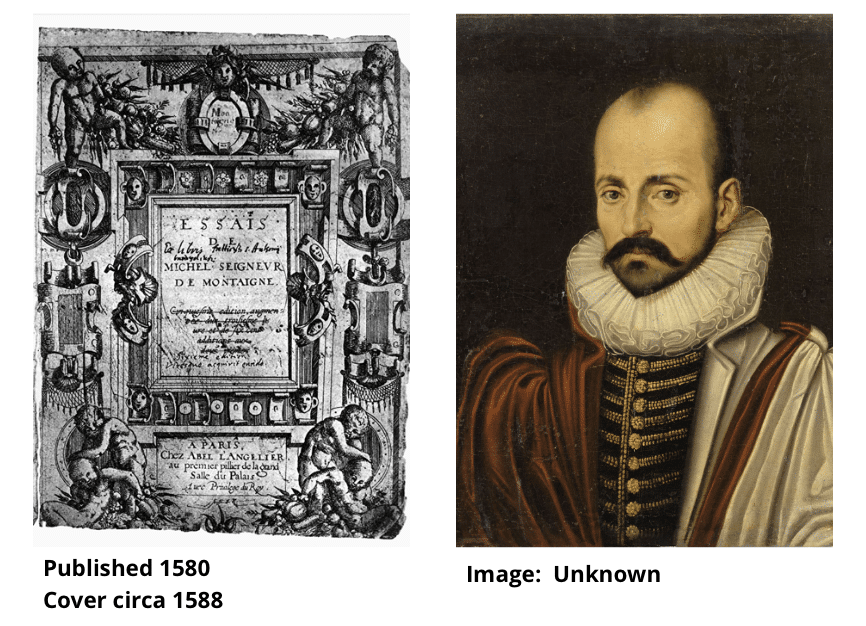 If you’re looking for more inspiration, here are a few additional resources:

~ If you want a very abbreviated history of the French Wars of Religion (1562-1598), here’s a 10 min video that outlines the players and the ever changing plot!

~ In 2009, Jane Kramer wrote an utterly charming article on Montaigne — Me, Myself & I — for The New Yorker.

~ Sarah Bakewell’s latest book (2016)  (I have not read.)  At The Existentialist Cafe: Freedom, Being, and Apricot Cocktails

~ If you’d like to explore Montaigne’s essays but don’t want to spring for the volume, LibriVox has FREE audio recordings of several essays.