Learn to Play With
The Hand Dealt

“Life is not a matter of holding good cards, but of playing a poor hand well.”
— Robert Louis Stevenson, novelist, essayist, poet

The Scottish writer Robert Louis Stevenson (RLS) is remembered as the author of the iconic ‘boys’ books, Kidnapped and Treasure Island, and the horror novella, Strange Case of Dr. Jekyll and Mr. Hyde. (“The” was added to the title for later editions.)

Stevenson’s reputation in the canon of writers has fluctuated over the years. The academic community and professional critics often dismiss him as second-tier or a ‘children’s writer.’ At the same time, authors like Vladimir Nabokov and Jorge Luis Borges greatly admired his work and craft.

Stevenson read broadly — lots of history and fiction. And from an early age, traveled widely. His father was an accomplished lighthouse architect and engineer. RLS, an only child, was often allowed to accompany his father to work.

Indeed, the son was supposed to take up his father’s profession and join the lighthouse business. But he sidestepped lighthouses and compromised with the study of law. He received a degree but never practiced, succumbing to the writing profession.

Following Michel de Montaigne’s footsteps, Stevenson started his writing career as an essayist, often of travel pieces. His first paid piece was titled, ‘Roads’. His essays on the craft of writing, aptly titled Essays on the Art of Writing is worth considering if you’re a writer. Plus, he wrote poetry.

It wasn’t until he was in his 30’s that he began to publish fiction.

Arguably, Stevenson’s most famous story is his Jekyll & Hyde tale. It quickly entered our vernacular (to be a ‘Jekyll & Hyde’ personality) and immediately took hold in the entertainment industry, never to let go.

Adaptations popped up instantly. Within a year of the book’s publication (1886), it was dramatized on stage by the actor-manager Richard Mansfield.

Virtually unknown today (I’d never heard of him), Mansfield was a superstar in his day. He’d studied to be a painter, but when his pictures proved uninspiring and unsaleable, he turned to the theater. It was a wise move proving more lucrative in fame and fortune. At his death, The New York Times obituary declared, “He was the greatest actor of his hour, and one of the greatest of all times.” 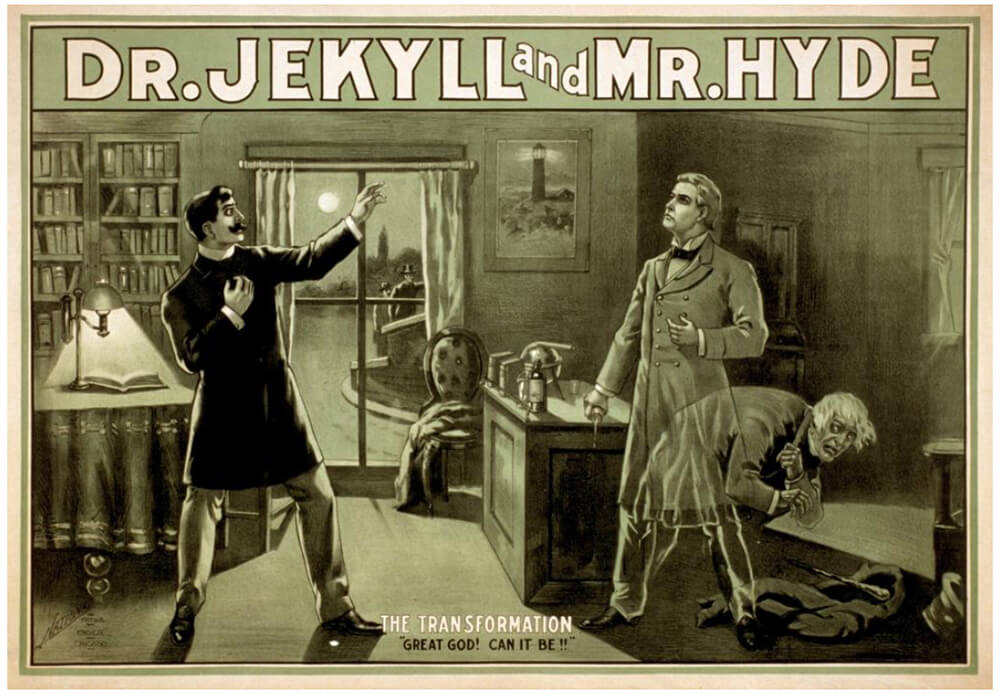 In 1887 Mansfield cashed in on the enormous popularity of Stevenson’s novella by starring in a New York stage production.

In 1888 the production moved to London with Mansfield in the dual lead. The transformation scenes from Jekyll to Hyde were said to be so real, audience members fainted, and no one wanted to walk home alone.

As it happened, the London production coincided with a series of murders haunting London by the unidentified Jack the Ripper. “The Ripper” was said to be a regular guy by day and a monster by night.

The violent and precise nature of the killings — victims were skillfully dissected — led to an anonymous letter sent to the authorities suggesting that Richard Mansfield was Jack the Ripper.

The argument went that because Mansfield was so skillful in his quick and chilling transformation from Jekyll to Hyde, he was surely capable of the sharp, precise, and stealthful dissections littering London’s side streets.

Eventually, rising public hysteria about the unsolved crimes and the murderer’s profile circulating amongst the public — a regular guy by day, lunatic by night — forced the London production to close.

A few years later, with a commercial mentality undeterred by the Ripper comparison, Mansfield created The Mansfield Calendar for 1900. The image for December was a double exposure of Mansfield’s transformation from Jekyll to Hyde.

Jekyll & Hyde have been fodder for hundreds of entertainments in radio, TV, and film, most of them sensational if unfaithful to the original text. Writer/Actor Troy Howarth said it was “the most filmed work of literature in the silent era.”

Based upon literature’s most terrifying characters — Frankenstein, Dorian Gray, Justine, Dracula, and Jekyll & Hyde — the series “weaves together these classic origin stories into a new adult drama.”

The series title comes from penny dreadfuls, which were cheap popular serial literature produced during the nineteenth century. The pejorative term typically refers to a story published in weekly parts, each costing a shilling in the UK and a penny in the US.

Jekyll and Hyde have had a long run.

But, we often forget that the novella wasn’t Stevenson’s main creative focus in the fall of 1885 as he scribbled his shocker.

Stevenson was awaiting the publication of an ‘adult’ novel he thought was his masterpiece, Prince Otto. He’d spent years writing and rewriting this magnum opus. 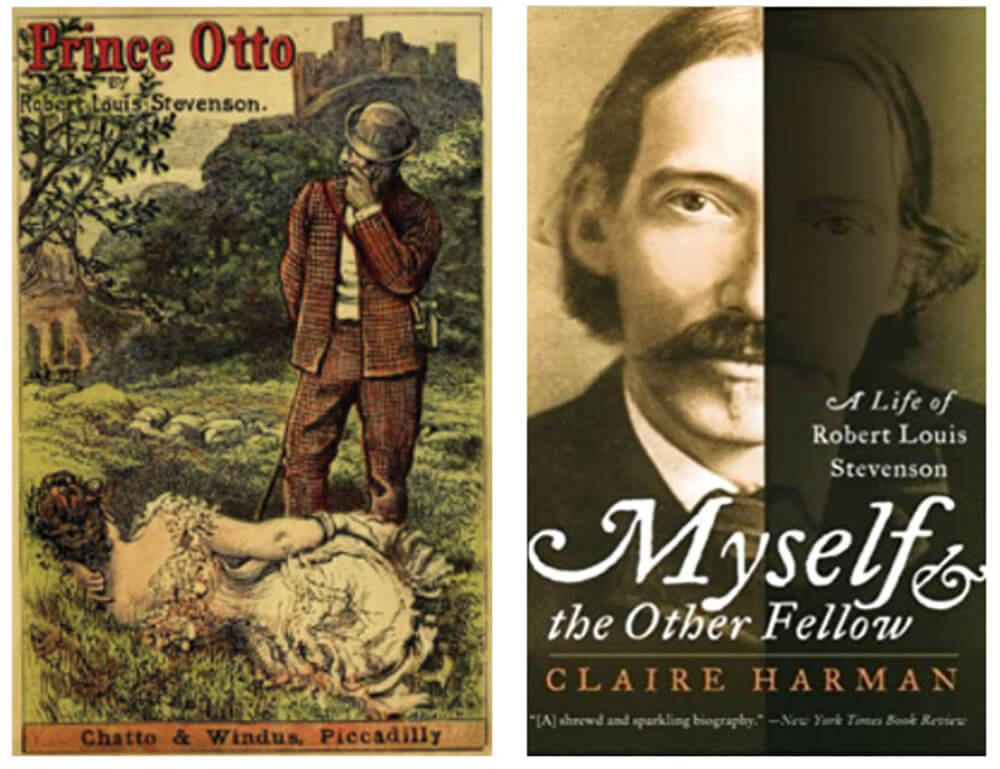 In her thorough and entertaining biography, Myself & the Other Fellow, Claire Harman writes,
“Prince Otto has seldom been reprinted and is regarded with something like embarrassment by Stevenson’s apologists. He seems to be laboring in it to find out what he was best at — fine writing, dramatic action, creation of character, fantasy.

Awaiting the publication of his Prince, bedridden in Bournemouth, the family holiday aborted due to RLS’s debilitating health, increasingly desperate for money, Stevenson penned his ‘shilling shocker.’

There are several accounts chronicling the birth of Jekyll and Hyde — most written after Stevenson’s death. According to these stories, the tale came to Stevenson in a dream. Awakened from his nightmare by his wife, Fanny, he immediately began to scribble in bed.

He produced a first draft in three days; I imagine him hurling the written pages from his bed to the floor. Some biographers have speculated he was inhaling a white powder 🙂 — accounting for his frenetic pace. But who knows.

It had long been Stevenson’s practice to have Fanny read and review his work. She often provided rewrites and elaborate written commentary. Fanny was known to be formidable.

This time was no different. Fanny shared her thoughts: she hated the story.

Receiving his wife’s comments, Stevenson — in what must have been a fit of frustration — threw the draft of Jekyll & Hyde into the fire grate and watched it immolate. 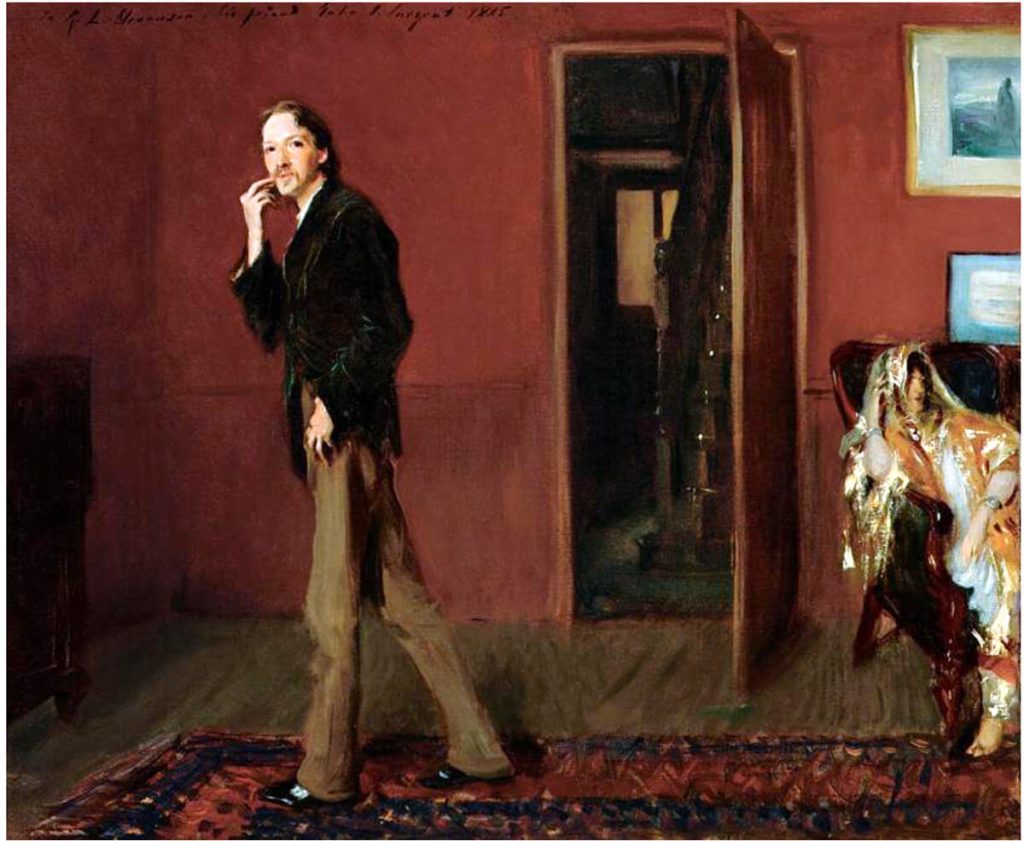 In this famous and very strange portrait Robert Louis Stevenson and His Wife (1885) by John Singer Sargent held by The Metropolitan Museum, we see Stevenson nervously pacing as he looks out while his wife, Fanny lounges, half hidden in an exotic costume on the chaise.

Years later, after Stevenson and Fanny were long gone, Fanny’s son, Samuel Lloyd Osbourne, remembered the episode in his 1924 biography, An Intimate Portrait of RLS By His Stepson, as a terrible row between his mother and stepfather.

We’ll never know if Fanny was right about her husband’s first draft. Happily, for us, Stevenson picked up his pen and continued to write, leaving us one of the most iconic tales in Western literature that’s spawned hundreds of other entertainments.

So why do I tell you this story?

— Life’s road is rarely mapped as we plan — or the way we think it should be. The current COVID pandemic has indeed reminded all of us.

— We all get feedback we don’t like — but sometimes there’s gold in ‘negative’ information. It’s just information. Keep working.

— Listen. Get curious about what you can’t yet see — Just because the door is closed doesn’t mean there isn’t something interesting waiting for you.